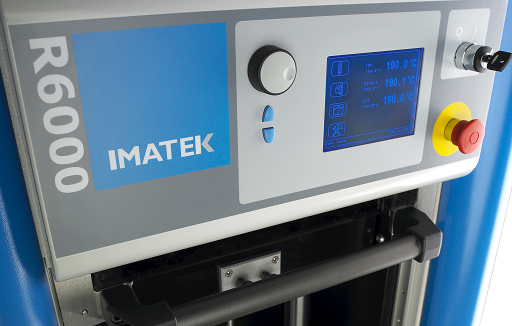 Rheology (from Greek ῥέω rhéō, ‘flow’ and -λoγία, -logia, ‘study of) is the branch of physics that deals with the deformation and flow of matter, most commonly the flow of liquids. When liquids are made to flow – when you squeeze toothpaste out of a tube, for example – they tend to resist that flow, and that resistance is called viscosity. Different liquids can have dramatically different viscosities: for example syrup has a viscosity about 100,000 times that of water, and molten polymers are more viscous still.

Many manufacturing processes are affected by the viscosity of fluids: think extruding dough to make spaghetti, or injection moulding buckets, or blow-moulding flexible plastic sheets. Measuring the viscosity of liquids under different conditions is important both for designing those processes, and for manufacturers of the raw materials to check their products have the desired properties before they leave the factory.

Confusingly there are two types of viscosity that we will consider here, corresponding to two different way of applying stress.

Case (a) has the (blue) liquid stationary on the bottom surface, while the top surface is pulled (to the right in this case), which changes its shape. This is called shear, and the corresponding rheological quantities are shear stress (the effort needed to deform the fluid), shear rate (the rate at which it is deformed) and shear viscosity (the ratio of the two). This type of flow is characteristic of fluids moving through constrained channels. For example, when blood flows through an artery the blood in the centre of the vessel moves faster than that at the edges, creating a velocity gradient that causes the shear deformation.

Case (b) is perhaps simpler to understand. The stress is in the direction of flow, and causes the fluid to elongate at a particular rate. This is called extension, and the corresponding rheological quantities are extensional stress, extension rate and extensional viscosity.

Of course the viscosity of a particular material depends primarily on the details of its composition, both at the molecular level and at macroscopic scales. Temperature also has a big effect, in general materials becoming less viscous as they heat up. But interestingly, the viscosity of a lot of materials depends on the rate at which they are deformed. Such materials, and this includes all molten polymers, are known as Non-Newtonian fluids. In most cases, the viscosity reduces as the rate increases – this is known as shear thinning (think tomato ketchup). There are a few fluids that exhibit the opposite effect, shear thickening (think a mixture of cornflour and water).

A rheometer is a device that measures viscosity, and for it to be useful it should be able to measure the relationship between stress and strain rate in both shear and extensional modes, and to do so at different temperatures, and at different shear rates. It should do so at shear rates that are representative of the processes that you are interested in, whether that is extrusion, injection moulding, blow-moulding or something else.

There are a number of designs of rheometer, of which one is the capillary extrusion rheometer. 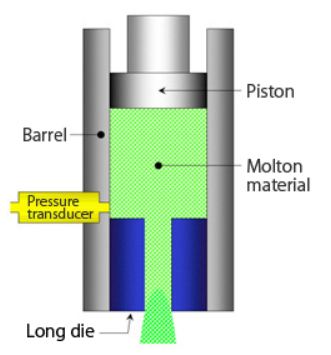 Here, a heated cylindrical barrel contains the material being tested. A motor-driven piston pushes the material down the barrel and through a small hole at the end of the barrel known as a die. A transducer measures the pressure of the material just above the entry to the die.

In one mode of operation, the piston moves at a series of constant speeds, each of which creates a certain shear rate of the material through the die. Once the pressure transducer reading is stable, the pressure for that speed is recorded, from which can be calculated the stress and hence the viscosity. The rheometer then moves on to the next piston speed, and hence the next shear rate. Repeat the test at different temperatures, and you can build up a picture of how shear viscosity depends on shear rate and temperature.

But it’s not quite that simple. 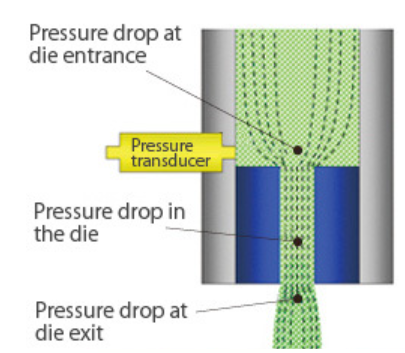 In fact, while the flow of the material through the die is very much a shear deformation, the entry of the material into the die is primarily an extensional deformation – as the streamlines converge they accelerate, stretching the fluid. The pressure drop that is measured is a combination of the effects of the extensional viscosity and the shear viscosity. So how can they be teased apart?

A neat method is to perform the test twice, once with a long die, and the second time (using the same piston speeds and hence shear rates) with a die of zero length, for which there is no shear component. By subtracting the pressures obtained in the second run from the first (PL – P0), you obtain “pure” shear, and the P0 values on their own can be used to derive the extensional results. Even neater, by using a rheometer with two pistons and two separate bores in the barrel, you can actually perform both the runs at the same time, and get both the shear and extensional results from a single test.

And that, in a nutshell, is what a twin-bore capillary rheometer does.